SOPHIE and the Baltic Sea

At the start of October the SOPHIE team held their penultimate workshop exploring the relationship between public health and the sea, this time focusing on Helsinki and the Baltic Sea.

The connection with the sea is visible everywhere in Helsinki. Ferries depart from the harbour; cruise ships arrive bursting with tourists; fishing boats land and sell their catch; and, even on a grey and cold day in October, people swim in the harbour pool.

The peninsula nature of the coastline creates an extensive recreational space alongside the water and many people have a second house near the sea. These characteristics make Helsinki an ideal case study to identify trends which should feed into the SOPHIE strategic research agenda.

Working closely with SYKE, the Finnish Environmental Institute, and experts from the Bonus project on Blue health and wealth from the Baltic Sea, we assembled a diverse group of seventeen stakeholders to explore the relationship between the sea and public health. 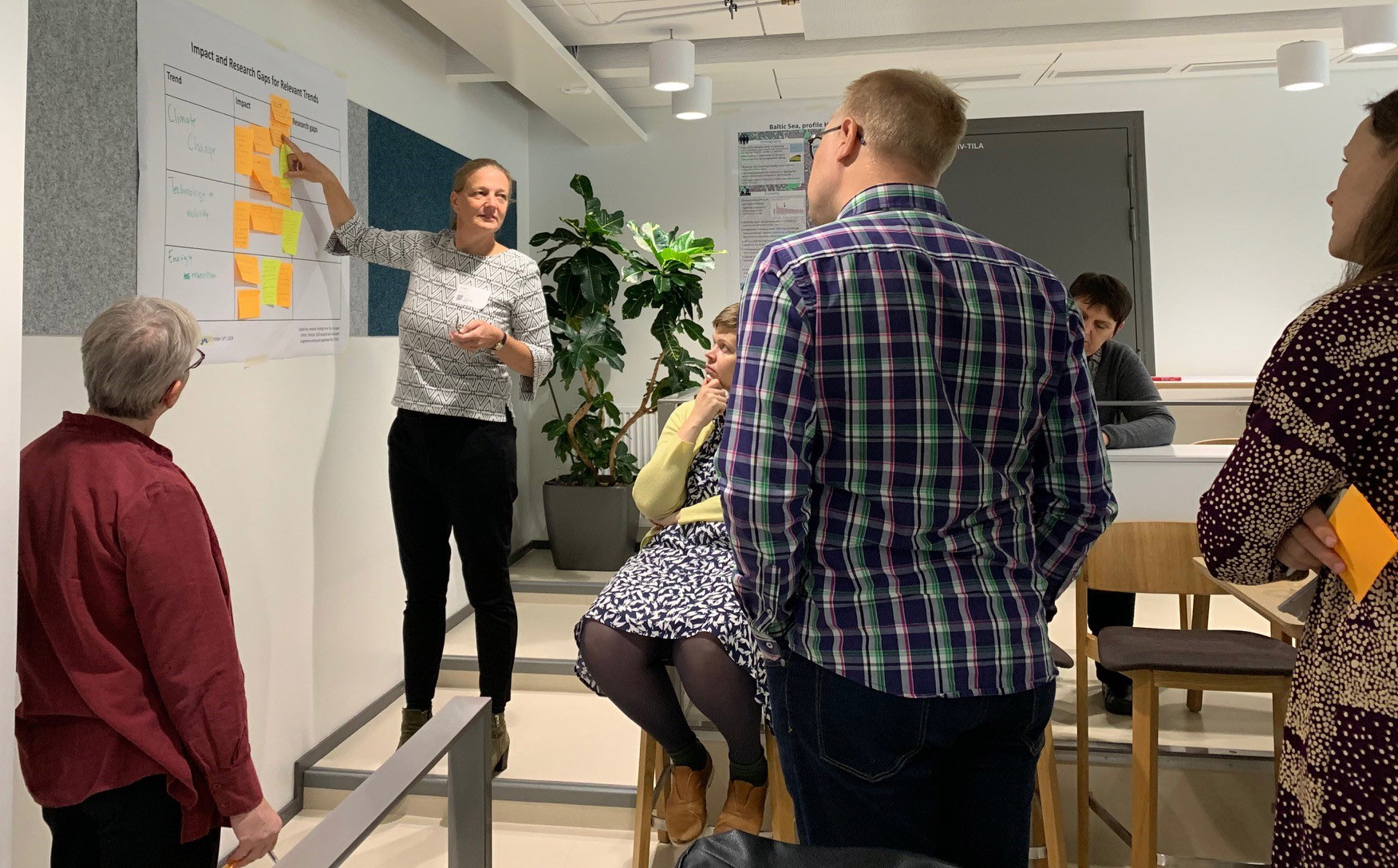 The most relevant and uncertain future trends were selected from a broad range of topics such as demography, economy, society and culture, technology, ecology, policy, and institutional settings. Interestingly, discussions showed that the most relevant trends for the Baltic Sea are not the same as the most uncertain trends, implying that future research should cover a broad range of subjects.

An overwhelming majority of our participants considered climate change as the most relevant trend affecting human health and the Baltic Sea. Its diverse impact on ecology was top of the agenda, likely to lead to:

Discussions also mentioned how climate change might impact on the governance and economy of the area, and have wider socio-cultural effects. 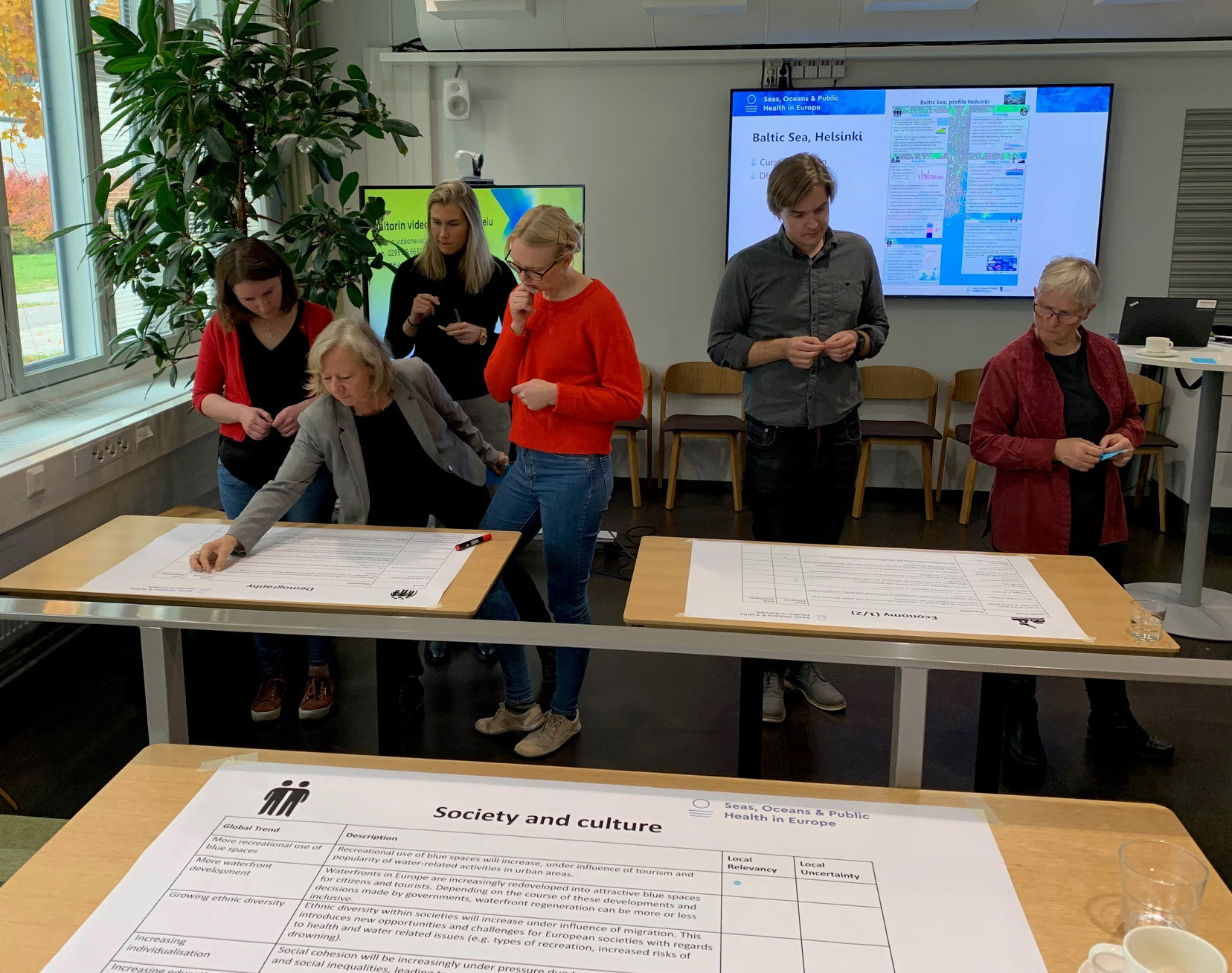 Governance issues centred on the response to the rapid and unpredictable increases in both sea level and flooding, as well as the paralyzing ‘lost cause’ effect of negative ecological outcomes. Concern was also raised about the different attitudes to environmental change in countries surrounding the Baltic Sea, and how this might complicate a coordinated and consistent response – particularly as some do not have a history of stable, peaceful societies.

Rising sea levels featured again as a driver for economic concerns related to climate change, this time due to the salinization of groundwater and having an impact on food production. The effect of algae blooms and an increasing push for marine renewables were also noted as economic pressures to prepare for.

The social and cultural impacts of climate change featured discussions around the potential for harmful algae to make beaches unsafe, and how the loss of homes and land may cause significant psychological trauma. Research gaps were also identified, as was the need for more interdisciplinary approaches which cover the complexity associated with a warming planet.

Beyond climate change, broader trends that emerged as important for the future of public health and the Baltic Sea included:

Interestingly, these issues differed from those defined as most uncertain, with participants regarding migration, consumer food preference, and the digitalisation of society, as most unclear.

The workshop was particularly lively and interactive and we would like to thank everyone who attended. Arrangements were also made to dovetail the SOPHIE project with the BANOS programme – an initiative aiming to create a research agenda for the Baltic and North Sea.

Would you like to take part in these discussions? Join our community here!

A space for researchers and professionals to meet, interact and build working partnerships.

The Expert Group combined interdisciplinary knowledge from researchers and professionals to develop a vision for the future of Oceans and Human Health.