Posted on the 1 August 2019 by Dr Aoife Kirk, Guest Contributor

“There’s hope from the sea but none from the grave.” – Irish saying

The ocean covers over 70% of the Earth’s surface and contains 97% of water on the planet, yet we rarely discuss the importance of seas and oceans for health in daily life.

Whilst we might consider immediate threats from the risk of drowning or flooding, or the health implications of swimming in polluted water, we often overlook how the ocean can improve our lives.

To redress this balance, Irish Doctors for Environment recently joined forces with the SOPHIE project in Sligo, Ireland, to explore the links between the oceans and health, and discuss how marine tourism and citizen science might benefit the Irish public.

Easkey Britton began proceedings  by discussing qualitative data from across Europe which demonstrates the complexity of emotions the sea can elicit. Words such as “fear” juxtapose with “happiness” and “belonging” in Easkey’s data, while other words such as “loss” contrast with “love”. She told how the ‘story’ and tales of ‘personal connection’ to the sea can affect the protection of coastal communities and create healthier environments.

Seamus McGoldrick spoke passionately about his own relationship with the sea; from travels which shaped dedication to his current role as Clean Coasts Ambassador, to how to educate both adults and children on the environment and marine protection through his business Sligo Surf Experience.

(Our group had experienced their own ‘blue health’ immersion the day before with thanks to Seamus along with a beach clean education courtesy of ‘Seastainability’ and the expertise of ecologist Rosiin NigFhloinn.) 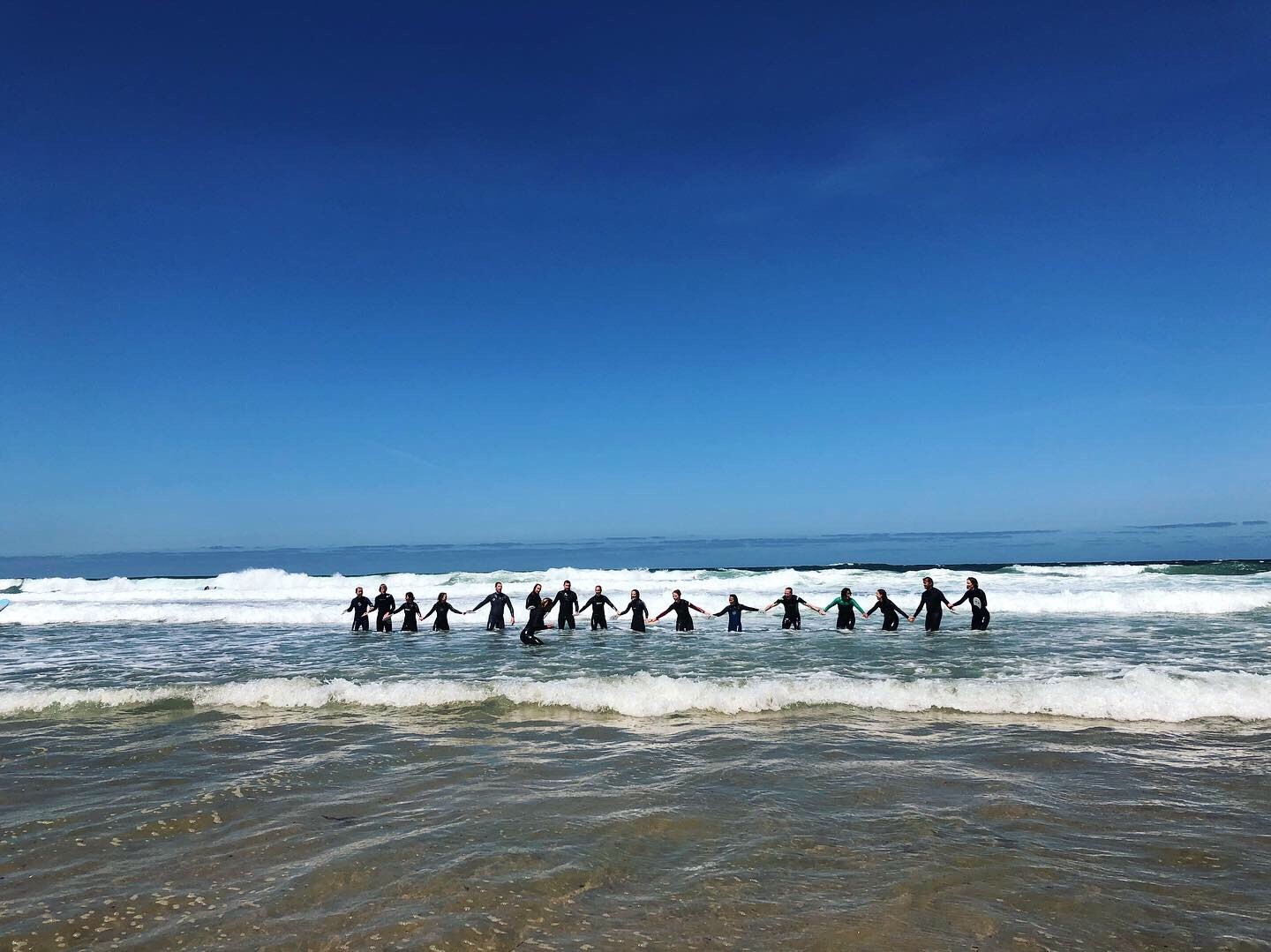 Participants take a dip in Sligo.

Derek Parle, chartered physiotherapist, spoke about the community spirit which is leading the exciting new development of the Surf Centre in Strandhill, along with the interpretive element which will showcase the history of surfing in the region. He described his passions for families to access waves along the west coast of Ireland through Surf Sundays, along with the duty of “elders” of the sea to grant others the opportunity to experience the delights of surfing and paddling out in the waves.

Another major benefit of the ocean includes the provision of many of the medicines we use in Western society. As the coral reefs continue to diminish—due to changes in sea temperature and acidification of our ocean—we risk losing a valuable resource for many of our basic needs.

I spoke of the importance of holding optimism for action at a time where it can often be easy to become apathetic. I also stressed the need to work together with local communities, healthcare workers, and businesses to tackle challenges and opportunities which lie ahead, epsecially in relation to the climate emergency.

The highlight of the day was the session held by Mariluz Parga from Submon, and Andrea Arnau and Julia Vera from WildSea. They spoke about the 7 reasons why we should all love the ocean, including the nutrition it provides, the air we breathe, keeping temperatures regulated and how it is a place for everyone to call a home.

They also spoke of the benefits of water based recreation—one study estimated healthcare savings of up to £200 million in the UK—which include improvements for those living with cardiovascular disease, dementia, and mental health disorders such as anxiety and depression.

The day finished off with a ‘fishbowl panel’ which was hosted by Easkey Britton, exploring each of the panel member’s personal relationship with the sea. The panel included Dr Blaithin Sweeney of Rennafix Havin A Laugh, Tom Losey of Liquid Therapy, Becky-Finn Britton of Clean Coasts and Dr Yvonne Lang of Sligo IT.

Topics of interest included the development of an “Adventure Network” within the North West of Ireland, the importance of diversity and access to ‘blue space’ to all citizens of Ireland, and the need to bridged gaps between research and education.

Although the importance of water is often underestimated in developed countries, it is in fact under threat across the world. However, thanks to positive action from individuals and local communities in Ireland and further afield, there are plenty of reasons to remain hopeful for the future of a healthy planet.

For those of you who are interested in further information about Irish Doctors for Environment, you can visit our website at www.ide.ie for monthly newsletters and information about the links between the environment and healthcare.

Dr Aoife Kirk can be contacted at irishdocsenv@gmail.com.

This project has created awareness of Oceans and Human Health issues in the tourism industry.

A space for researchers and professionals to meet, interact and build working partnerships.

Listening to people from across Europe to define future oceans and human health research priorities.

This pan-European survey aimed to improve our understanding of the European public’s beliefs about how marine issues affect human health and wellbeing.