“Look after our seas and oceans, and they will look after us” says a new research paper, published this week by the SOPHIE team.

In a wide-ranging reflection on the many ways in which human health and wellbeing is inextricably linked to the health of the “global ocean”, the commentary urges an approach which unites the fields of ocean science and healthcare.

Whilst the seas and coasts provide an essential source of food, opportunities for trade, and access to sustainable energy, they also offer the chance for people to interact with marine environments—and these experiences can boost both mental and physical health, say the authors.

The report, published in the journal People and Nature, launches at a time when the health of the global ocean has been described as “seriously degraded” by the United Nations, with factors such as pollution, overfishing and ocean acidification placing aquatic ecosystems under increasing threat.

These issues have also prompted a global call by UNESCO for the 2020s to be the Decade of Ocean Science for Sustainable Development, an effort brought into stark focus by the projection that the world’s population will pass 9 billion in 2050.

But policy-makers across the world are currently lacking a clear strategy for managing the future of the global ocean, and ensuring that positive health impacts are factored into the decision-making process. 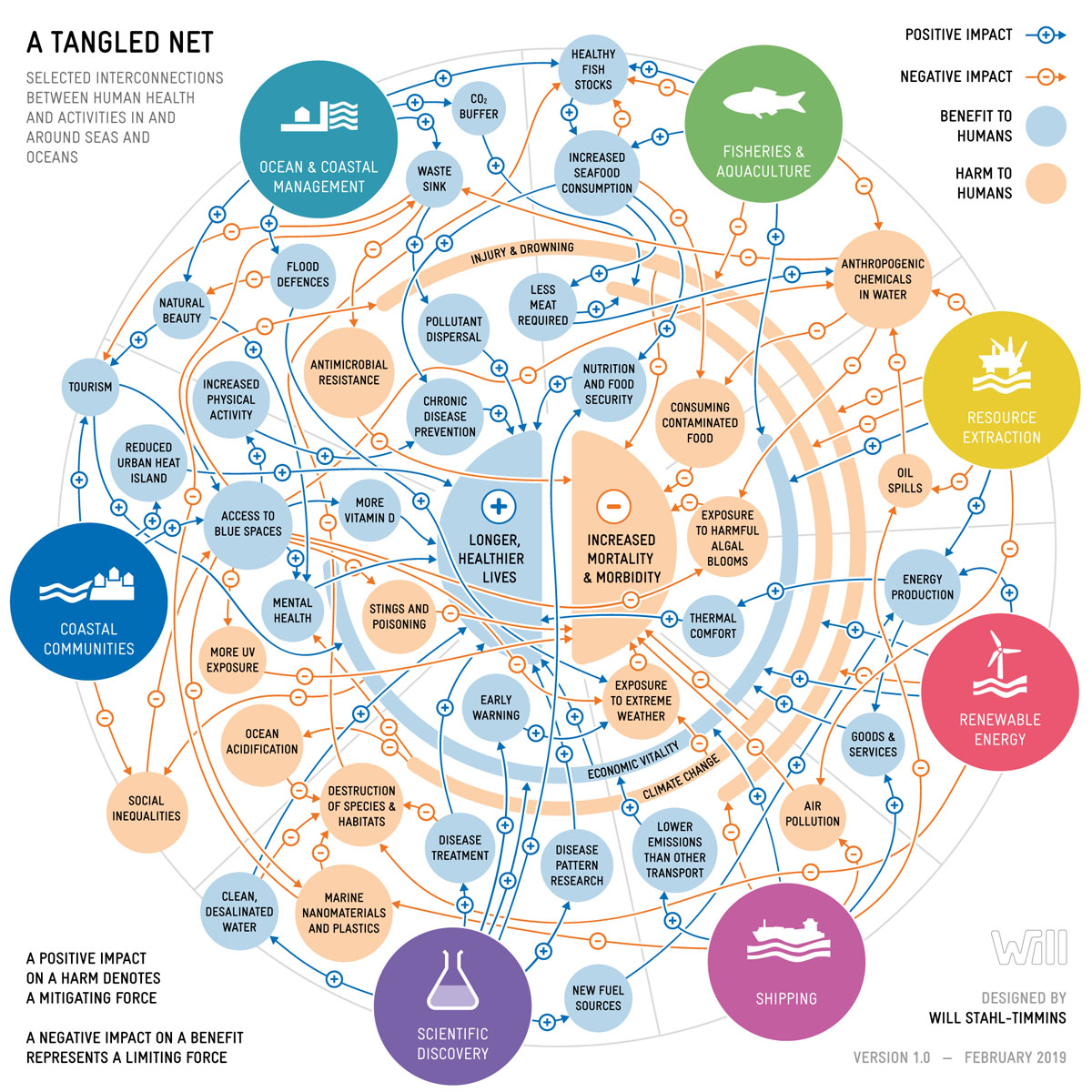 A tangled net of interactions.

Professor Lora Fleming, one of the reports authors, wants to see a move beyond the typical consideration of risk, she said:

“With threats from pollution, toxins, storms and flooding, we’ve historically viewed our interactions with the ocean as detrimental to health. But research over the last ten years has shown there’s much more to this relationship, and that oceans benefit health and wellbeing through a complex web of mechanisms. As we move to protect our threatened oceans, we need to recognise the mutual benefits to be gained from a cleaner and healthier planet.”

To have the greatest chance of success, the paper recommends greater international collaboration, and a concerted effort to improve understanding of the interactions between the oceans and health—particularly in deprived and marginalised communities.

“We must accept that the state of our global ocean will, in large part, determine the future sustainability, health, and wellbeing of all humans on Earth” concluded Professor Fleming.

Fostering Human Health through Ocean Sustainability in the 21st Century is published in People and Nature and is available at doi.org/10.1002/pan3.10038.

People, Health and the Ocean Webinar

You’re invited to the People, Health and Ocean webinar.

Health and the (North) Sea

In March 2019, specialists from a number of disciplines gathered in the Netherlands to discuss the relationship between public health and the North Sea.

SOPHIE members gathered in Dun Laoghaire, Ireland in April, to take part in the first of two expert workshops.